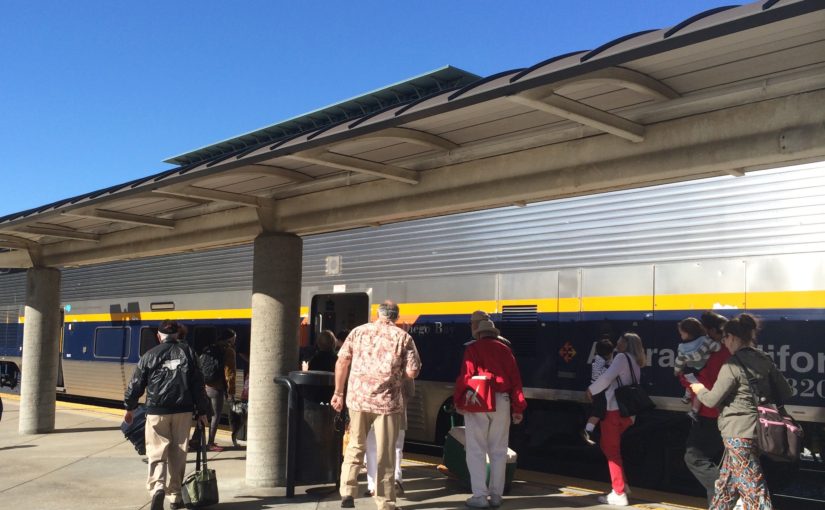 On August 16, 2016, the Capitol Corridor Joint Powers Authority (CCJPA) learned it was the recipient of one of 14 state grants totaling $390 million to support Governor Brown’s focus on advancing California’s public transportation system and reducing greenhouse gas emissions contributing to climate change. Administered by the California State Transportation Agency (CalSTA), the Transit and Intercity Capital Program (TIRCP) grants are funded with proceeds from the state’s Cap-and-Trade auctions.

As one of the state’s three successful intercity rail services, the Capitol Corridor (Auburn-Sacramento-Oakland-San Jose) received $8.9 million that will help fund the following three projects:

“We were thrilled to hear that Capitol Corridor had been selected to receive one of the TIRCP grants,” said David Kutrosky, managing director of the Capitol Corridor Joint Powers Authority, which manages the Capitol Corridor service. “These funds will allow us to move ahead on critical transportation projects that will not only improve mobility within the rapidly growing Northern California megaregion, but also contribute directly to Governor Brown’s goal of lowering harmful carbon emissions.”

The Capitol Corridor serves 17 stations along the 170-mile rail corridor connecting Placer, Sacramento, Yolo, Solano, Contra Costa, Alameda, San Francisco, and Santa Clara counties, paralleling both the I-80/I-680 and I-880 corridors in segments from Sacramento to San Jose. The CCJPA partners with Amtrak, Union Pacific Railroad, Caltrans and the communities comprising the Capitol Corridor Joint Powers Authority (CCJPA) to offer cost-effective intercity passenger rail and offers a convenient way to travel between the Sierra Foothills, Sacramento, the San Francisco Bay Area and Silicon Valley/San Jose. For details about the Capitol Corridor, visit www.capitolcorridor.org, or call 1-877-974-3322. Join us on Facebook at www.facebook.com/CapitolCorridor and follow us on Twitter at www.twitter.com/CapitolCorridor.