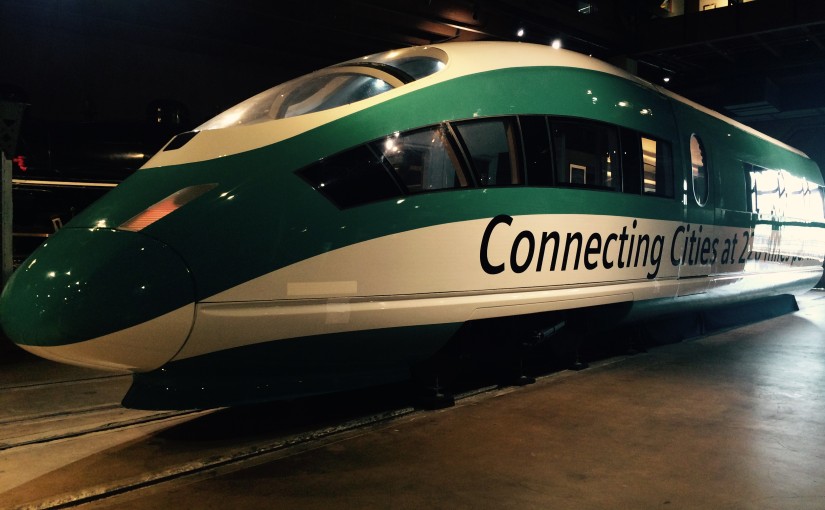 Amid the rich rail history and old-time locomotives on display at the California State Railroad Museum in Old Sacramento, there is an exhibit that looks to the future of rail travel.

The High Speed Rail Exhibit, which opened in November 2015, explores the fascinating world of high speed rail, from its origins in Japan, to current and future plans for development here in California. The exhibit features a full-size mock-up of a high speed rail train, provided by Sacramento-based locomotive manufacturer Siemens, as well as a Shinkansen high speed rail simulator from Japan.

Together, the Siemens train mock-up and the Shinkansen simulator, which is on loan from the East Japan Railway Company (JR-East), provide a realistic representation of a journey aboard a train traveling at up to 220mph. While the mock-up lets visitors experience what it would be like to socialize and dine on a high speed rail car, the simulator lets them take the train for a virtual “test drive” at full speed through a picturesque Japanese landscape.

My own test run of the simulator proved successful, as I was able to stop the train within one foot of the platform target at my destination station. Apparently this is no easy feat, but thanks to the guidance of a nearby museum attendant, I was able to perfectly time my deceleration from 200+mph to zero.

How the Exhibit Came to Be

The idea for creating a high speed rail exhibit at the Railroad Museum was conceived about a year ago, after the museum and JR-East discussed the loan of the Shinkansen simulator. With the addition of the Siemens mock-up, the museum had the unique opportunity to feature both full-size and simulated representations of a high speed rail train. Both JR-East and Siemens were involved in the planning, and the exhibit came together within just a few months.

In addition to the simulator and mock-up, the exhibit includes video features, interactive maps, images of high speed rail services across the globe, and information on the history and design of high speed rail systems. It’s a unique, hands-on learning experience that visitors of all ages will enjoy. 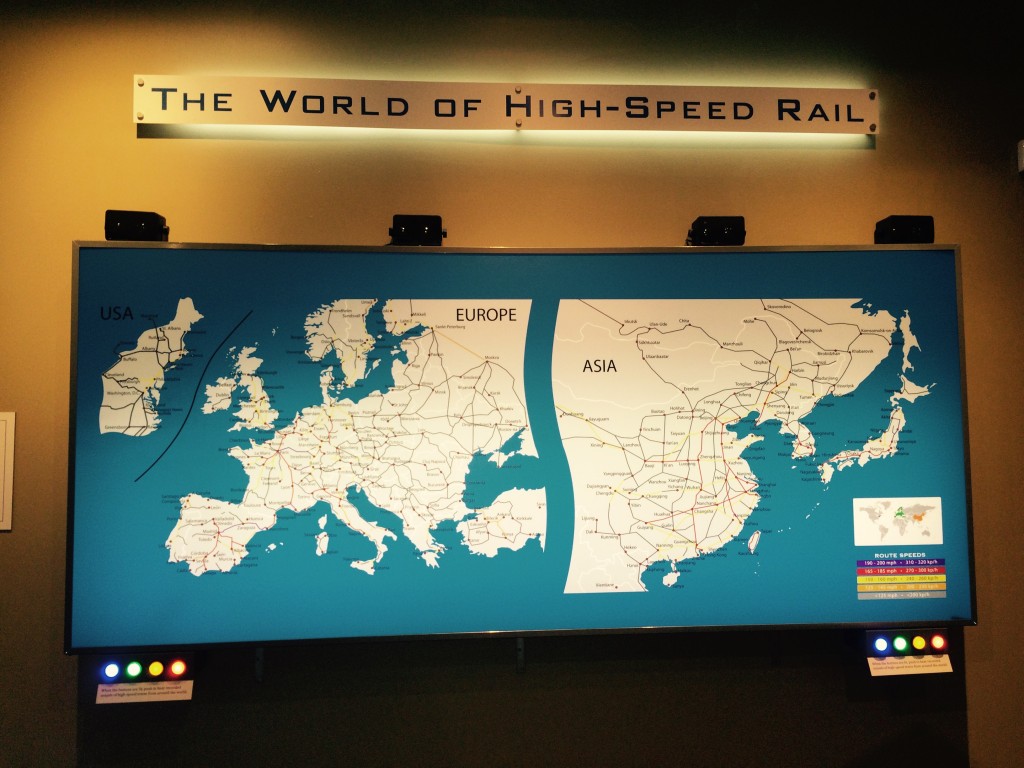 Since the exhibit’s opening, the museum has seen high visitor traffic and visibility, according to museum director, Paul Hammond. “People either come specifically to the museum to see the exhibit, or stumble upon it as they walk through,” said Hammond. “In its current form, the exhibit will be here for about a year, and after that, we will continue to update the exhibit to keep the presentation fresh and exciting.”

After spending a few hours exploring the exhibit, it’s hard not to be excited about the potential for California’s own high speed rail project. With construction already underway in the Central Valley, the service will eventually connect Northern and Southern California in less than three hours, providing a convenient and environmentally-sustainable alternative to driving on the state’s increasingly congested freeways or flying between cities.

While some critics contend that high speed rail cannot compete with air travel when it comes to time, Mr. Hammond points out that when you take into consideration the time it takes to check in at an airport, go through security, and retrieve bags, high speed rail could actually be just as fast, if not faster, than a plane.

David Kutrosky, managing director of the Capitol Corridor Joint Powers Authority (CCJPA), which manages the Capitol Corridor service, agrees that “high speed rail is time competitive when compared to both auto and air travel, offering a convenient alternative to congested highways and tiresome flight procedures.” He also points out the environmental benefits of passenger rail travel using both diesel locomotives and high speed trains, which are “the most environmentally sustainable forms of transportation.”

“Laying the Tracks” for the Capitol Corridor/High Speed Rail Connection

To pave the way for this connection, the CCJPA has set aside funds from an in-state bond measure for high speed rail and connecting services in order to make improvements to the Capitol Corridor line between the San Jose and Oakland stations, and between the Sacramento and Roseville stations. These initiatives, known respectively as the Oakland/San Jose Phase II and Sacramento/Roseville Third Track projects, will enhance current Capitol Corridor service and allow for streamlined connections to the high speed rail line. “CCJPA has been engaged and involved from day one with the high speed rail project, with a focus on making sure passengers can seamlessly transition between services,” said Kutrosky.

Capitol Corridor and high speed rail trains afford riders to opportunity to relax and be productive. While on the train, passengers can dine, socialize, sleep, work, or simply enjoy the views in a comfortable and relaxing setting. As Kutrosky puts it, “you have a wide variety of options while aboard the train and the ability to do the things you can’t do while driving.”

Mr. Kutrosky is optimistic about the future of rail in California. He predicts it will become a primary mode of transportation across the state, particularly for millennials who want to relax and multitask while commuting, and for seniors who need more accessible mobility options. “With the trends we’re seeing among millennials and seniors, the Capitol Corridor and high speed rail, together, have the potential to meet the state’s future transportation needs,” said Kutrosky. “Given these trends, an increasing proportion of the state’s transportation resources will be going into rail and other mass transit systems, of which intercity and high speed rail will be integral components.”

Whether you’re a rail enthusiast or simply looking for a fun way to spend the day, this informative and engaging exhibit is the perfect complement to the California State Railroad Museum’s more historically-focused features. The Museum is open daily (except Thanksgiving, Christmas, and New Year’s Day) from 10 a.m to 5 p.m. Best of all, with the museum only steps from the Sacramento Valley (Amtrak) Station, your journey can start on the Capitol Corridor and be just as enjoyable as the destination!

Visit the California State Railroad Museum website at www.csrmf.org for exhibit details and visitor information. And to plan your trip to Sacramento on the Capitol Corridor, go to www.capitolcorridor.org. 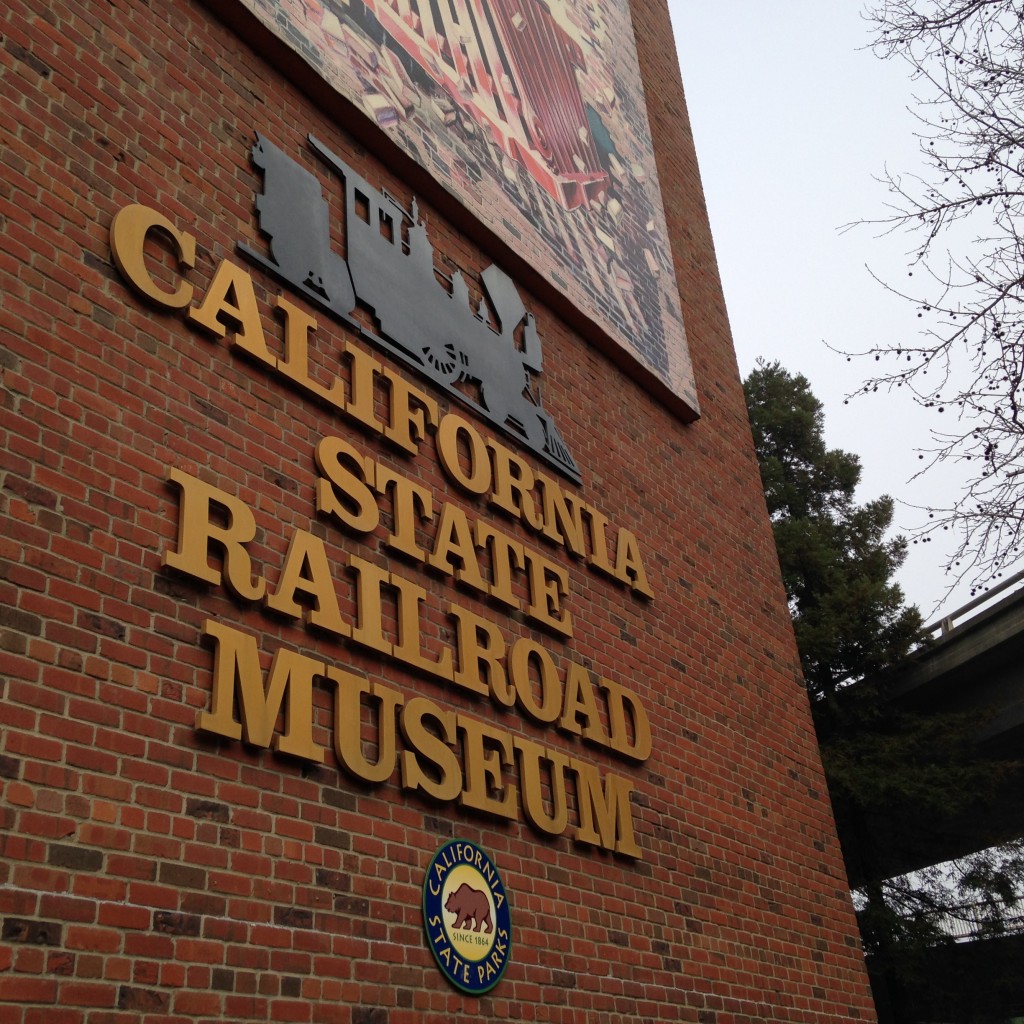