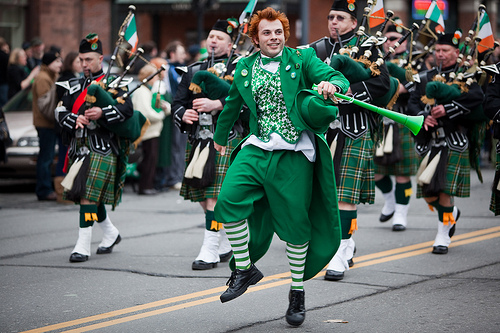 This weekend, festival fun abounds along the Capitol Corridor!

On Saturday, head to San Francisco for the St. Patrick’s Day Parade and Festival, the West Coast’s largest event celebrating Irish culture. Now in its 165th year, this free celebration includes a festival at the Civic Center Plaza, plus a parade featuring Irish dance troupes, marching bands, the San Francisco Police and Fire Departments, 100+ festive floats, and more. The festival will take place from 9am to 5pm, and the parade begins at the corner of Market and Second streets at 11:30am. To get to the fun, take the Capitol Corridor to the Richmond or Oakland Coliseum stations, connect to BART, and get off at the Civic Center stop.

This Sunday, enjoy delicious brews and bacon delicacies at the 2016 Oakland Bacon and Beer Festival. Taking place along the water in Jack London Square, this celebration of your favorite guilty pleasures will feature craft beer and gourmet bacon offerings from dozens of local breweries and vendors. The festivities take place from 2:30pm to 5pm, and tickets can be purchased online in advance. Best of all, you can feel good about indulging at this event, which will benefit Oakland Grown, a program of the Sustainable Business Alliance aimed at strengthening Oakland’s local economy. To get there, take the train to the Oakland Jack London Station, and you’ll be a short stroll from the action.

Film fans, you won’t want to miss the last weekend of the 2016 Cinequest Film Festival, a celebration of independent films taking place across a number of first-class venues in San Jose. This 13-day event, which began on March 1, features over 200 screenings and 124 world and U.S. premiers, along with appearances by more than 600 film makers, presentations by over 700 artists and innovators, seminars, parties, and more. Tickets can be purchased online in advance, and daily schedules are available. To get to this film extravaganza, take the train to the San Jose Diridon Station. Most venues are within walking distance of the station or are accessible by the VTA, with free transfers from the Capitol Corridor. Public transit options can be found on Google Maps.