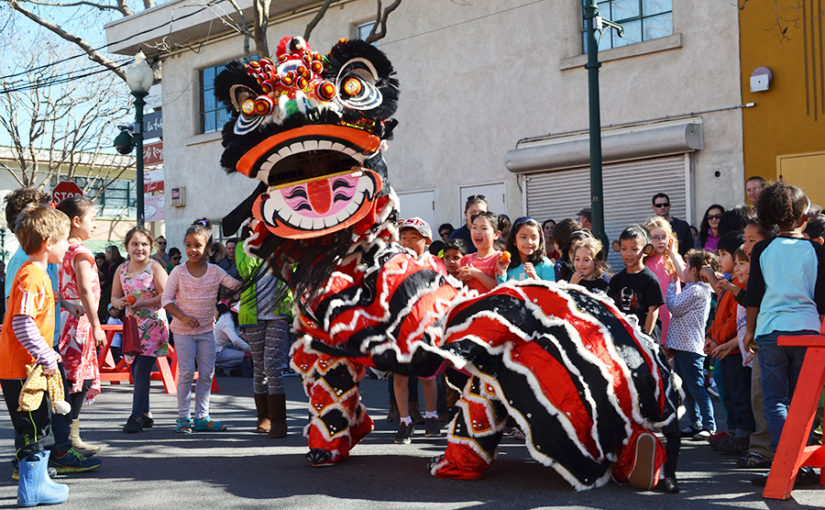 Welcome the Year of the Rooster with Lunar New Year celebrations in Berkeley; join Bay Area Native Americans at a powwow drum and dance festival in San Francisco, and enjoy street art, food and music at Oakland First Fridays. There is so much to do this weekend along the Capitol Corridor!

Come join the celebration of Year of the Rooster at the 9th annual Lunar New Year Festival on Fourth Street in Berkeley. From 12pm to 4pm, Saturday, February 4, the free family-friendly event will have activities for everyone including a Rooster drawing contest for kids, origami projects, and fortune telling. There will also be a martial arts demonstration, candy giveaway, a traditional parade, and a Lion Dance by the famous performers at Kei Lun. Everyone is invited to participate in the rooster community mosaic project — Stained Glass Garden — with the finished artwork to be donated to the Berkeley Arts Magnet School. Market Hall Foods on Fourth Street will be serving $5 Asian Chicken Sandwiches on the patio with drinks, snacks and candy for kids, and the bakery will be serving a Tangerine Sesame Tea Cake to celebrate Chinese New Year. To get there, take the train to the Berkeley Station, and connect to downtown Berkeley on AC Transit with a free Transit Transfer you can obtain by asking the Capitol Corridor conductor. Or, take the train to the Richmond Station or Oakland Coliseum Station, connect to BART, and get off at the Downtown Berkeley stop, which is just over a block from the festivities.

The Bay Area American Indians Two-Spirits (BAAITS) will be celebrating their 6th annual community Two-Spirit Dance and Drum Powwow Festival on Saturday, February 4. From 10am to 6pm at the Festival Pavilion in Fort Mason Center, dancers and drummers are invited to join in the celebration of the diverse Native populations that live in and around the Bay Area. Many visitors from different tribal nations across the country will also be in attendance. There will be Native arts and craft vendors, ceremonial giveaways, traditional dance, drumming, and singing throughout the day. Native American food vendors will be selling Indian Tacos, Tamales, and Buffalo Burgers, and the Native American Health Center will be providing free health screenings. Two-Spirit people is a modern umbrella term used by some indigenous North Americans for gender variant individuals in their communities and the powwows are traditional, Inter-tribal events that promote community togetherness, healing, and wellness. The event is free, open to the public and is the only Two-Spirit organized powwow in the world. Event planners are expecting a crowd of over 3,500. To get there, take the Capitol Corridor’s dedicated connecting bus from the Emeryville Station to one of our San Francisco stops, or connect to BART at the Richmond Station or Oakland Coliseum Station. From any of these San Francisco bus or BART stops, you can take public transit using Google Maps, catch a cab, or take Lyft or Uber. Discount BART tickets and Muni tokens are available for purchase in the Café Car of Capitol Corridor trains.

Get ready to experience art, eat great food and enjoy live music at Oakland’s First Fridays, the city’s biggest street block party. From 5 to 9:30pm on Friday, February 3, and every first Friday in March and April in Oakland’s KONO district (Koreatown Northgate), the free event will feature the usual evening of art gallery walks, mixed-use venues which are open with exhibitions of artist collectives, street artists, performers, musicians, dancers, DJs, and poets along five blocks of pedestrian-only Telegraph Ave. People from across the Bay Area will come together to enjoy turf street dancing, play ping pong in an outdoor beer garden, listen to great local live music, and nosh on some of the most creative culinary dishes from local food trucks. To get there, take the train to the Berkeley Station, and connect to downtown Berkeley on AC Transit with a free Transit Transfer from the Capitol Corridor conductor. Or, take the train to the Richmond Station or Oakland Coliseum Station, connect to BART, and get off at the 19th Street Oakland stop, which is just a short walk from all the action!