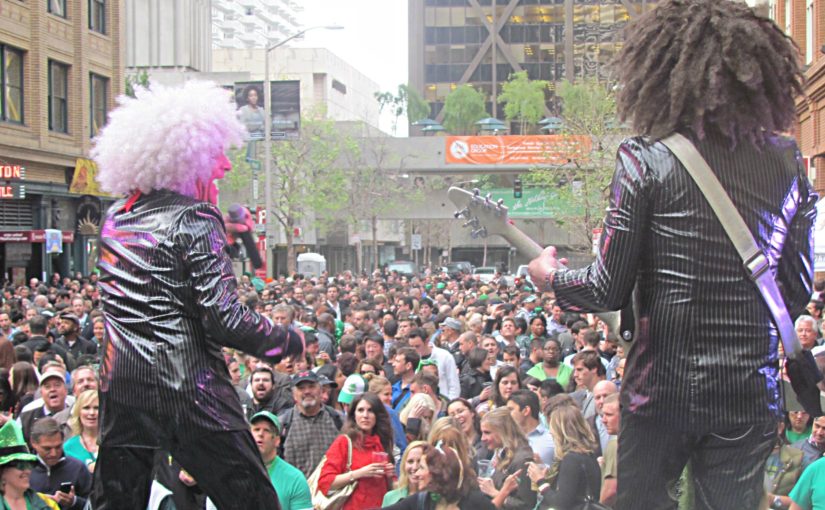 Gear up for a weekend of St. Patrick’s Day events including a block party in San Francisco and Irish Caroling in Oakland, a festive rumba party in Berkeley, and a shave-a-thon in Martinez. A weekend of full of events and activities await along Capitol Corridor!

Wear your favorite green outfit and join the revelry at the 32nd Annual St. Patrick’s Day Block Party in San Francisco’s Financial District on Friday, March 17. From 3pm to 11:30pm, the Royal Exchange will throw its annual free block party with traditional Irish fare, live music, and plenty of Guinness Beer to spread Irish cheer on St. Patrick’s Day proper. Around 5pm, there will be a live music kick-off with party band Wonderbread 5 performing on the outdoor stage on Front St., between California and Sacramento. There will also be traditional Irish menu items for purchase including Corned Beef and Cabbage, Shepherd’s Pie, and Irish Stew. To get there, take the Capitol Corridor’s dedicated connecting bus from Emeryville to the Transbay Temporary Terminal. You can also take the Capitol Corridor to the Richmond Station or Oakland Coliseum Station and connect to BART to downtown San Francisco and get off at Embarcadero Station, which is just a short walk to the Royal Exchange.

Bring the whole family and get ready to sing some traditional Irish songs on St. Patrick’s Day at the 6th Annual Irish Caroling Extravaganza in Oakland. On Friday, March 17, starting at 6pm, Jerk Church, a creative musical learning community for musicians and non-musicians, will lead a group of Irish carolers along the streets of Oakland armed with their instruments and voices to spread Irish cheer as they make their way to Jack London Square. Meet at Frank Ogawa Plaza with your Irish finery and be ready to sing some Irish folk songs. To get there, take the train to the Oakland Jack London Station, connect to AC Transit  with a free Transit Transfer from the Capitol Corridor conductor, and you’ll be just a 20-minute walk from the festivities.

Come enjoy Afro-Cuban folkloric drums, dances, and songs of rumba at the Rumba Party in Berkeley on Sunday, March 19. Starting at 3:30pm, at La Peña Cultural Center, there will be live Cuban drummers, dancers, and singers performing rumba, which was developed in rural Cuba, with strong influences from African drumming and Spanish poetry and singing. Rumba is also the word used for a group of related, community-oriented, music and dance styles in Cuba. The free participatory event – the Sunday Lounge Rumba — has been a community staple for 12 years at the center and recurs the first and third Sunday of each month. To get there, take the train to the Berkeley Station, and connect to downtown Berkeley on AC Transit with a free Transit Transfer. Or, take the train to the Richmond Station or Oakland Coliseum Station, connect to BART, and get off at the Ashby stop, which is just a short walk to La Peña Cultural Center.

Be a hero this weekend for children with cancer at St. Baldrick’s Shave-a-thon in Downtown Martinez. From 11am to 2pm at the Main Street Plaza, there will be “Shavees,” volunteers who will have their heads shaved in solidarity with kids fighting cancer. Martinez Mayor Rob Schroeder will be there getting green-colored hair shaved at the event. Not everyone who participates will be a “shavee.” There will also be fundraising teams, volunteers, and a donation booth to support the cause. The event is held by the St. Baldrick’s Foundation, a volunteer-powered charity that funds childhood cancer research grants. To get there, take the Capitol Corridor to the Martinez Station, which is just a short stroll from Main Street Martinez.