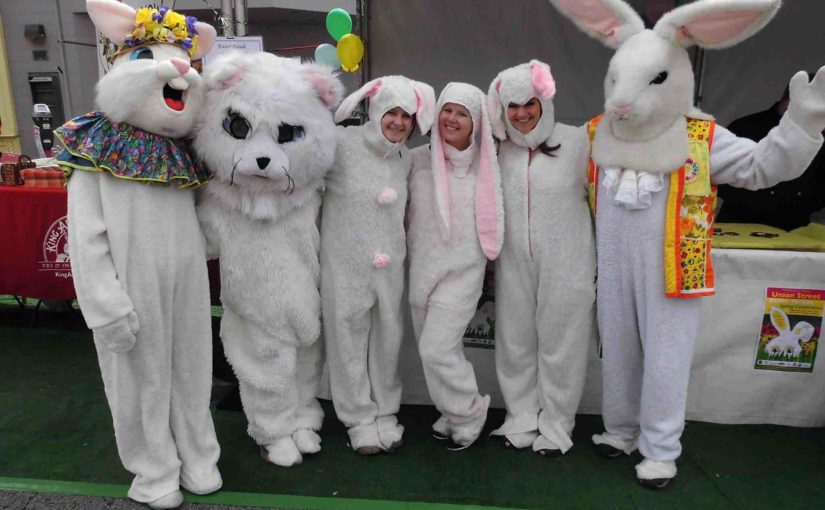 There are a lot of Easter weekend happenings all along the Capitol Corridor — including an Easter Parade in San Francisco, egg hunt in Berkeley, a Spring Eggstravaganza in Sacramento and even a walking tour of the Pirates of the Caribbean Ship in Oakland!

Spend a fun-filled, family egg-citing weekend in Sacramento at Spring Eggstravaganza. From 11am to 3pm, at Fairytale Town, there will be egg hunts with hunt areas separated by age group. After the egg hunt, kids can redeem their eggs for a prize based on the number of eggs they collect. There will also be spring-themed hands-on activities, visits with Peter Cottontail, and the Puppet Art Theater Company will be performing “Bunny Bootcamp” in the Children’s Theater. Tickets are $7 for adults, $7 for children (2-12 years old); and children 1 year old and under, and Fairytale Town members are free. Theater tickets are $2 for nonmembers and $1 for members. To get there, take the Capitol Corridor train to the Sacramento Station. From there, you can take a cab, Uber or Lyft, or hop on the SacRT Gold Line with a free Transit Transfer from the Capitol Corridor.

Get ready for some adventure and bring the whole family to Jack London Square this weekend for a tour of the Pirates of the Caribbean ship. On Saturday, April 15 and Sunday, April 16, from 10am to 1pm, the tall ship Lady Washington, a replica of an 18th-century sailing ship, which has appeared in several television shows and movies, including “Pirates of the Caribbean,” and Captain Hook’s ship from “Once Upon a Time”, will be open for dockside walk-on tours. There will be a living history experience with demonstrations of tall ship handling, sea shanty singing, and maritime storytelling. Crews will be on hand in period costume to answer questions and tell stories. Dockside tours are $5 (for donation). Schedules and ships are subject to change, so check the schedule first before heading out. Or call 1-800-200-5239 to confirm. To get there, take the Capitol Corridor to the Oakland Jack London Square Station, which is steps from the waterfront.

Get ready for some Springtime fun and make your way to University of California, Berkeley for Eggster’s 23rd Annual Egg Hunt and Learning Festival. On Saturday, April 15, from 10am to 3pm, there will be egg hunts for children 12 years of age and under, 30+ environmental conservation-themed craft/activity booths grounded in this year’s theme of “Co-Eggsistence”, and an all-day lineup of artists, performers, musicians, dancers, and a magician to round out the day. Bring baskets for the egghunt, plenty of water, sunscreen, hats, sunglasses, and layered clothing to this free event, which will be held at Campanile Esplanade (Sather Tower) at the UC Berkeley Campus. This year’s beneficiary is East Oakland Youth Development Center (EOYDC), which is dedicated to developing the social and leadership capacities of youth and young adults, preparing them for employment, higher education, and leadership opportunities. To get there, take the train to the Richmond Station or Oakland Coliseum Station, connect to BART, and get off at the Downtown Berkeley stop, which is about half a mile from the campus.

Easter is just around the corner, and there is no better way to celebrate than with bunnies and bonnets at the 26th Annual Union Street Easter Parade and Spring Celebration. On Sunday, April 16th, there will be an Easter parade on Union Street, between Gough and Fillmore Street in San Francisco’s charming Cow Hollow neighborhood starting at 2pm. But from 10am to 5pm, there will be activities for all members of the family, including a large inflatable bounces, kids’ rides and games, a climbing wall, a bubble jump, fun costumed characters, face painting, a petting zoo, pony rides, and visits with the Easter Bunny. There will also be live performances, and an Easter Bonnet Contest, with categories such as Most Elegant, Largest Hat, Most Comical, and Most Creative. Many of Union Street’s best restaurants will be serving special Easter menus in an outdoor bistro setting. To get there, take the Capitol Corridor’s dedicated connecting bus from Emeryville to one of our San Francisco stops, or connect to BART at the Richmond Station or Oakland Coliseum Station. From any of these San Francisco bus or BART stops, you can take public transit using Google Maps, catch a cab, or take Lyft or Uber. Discount BART tickets are available for purchase in the Café Car of the Capitol Corridor.