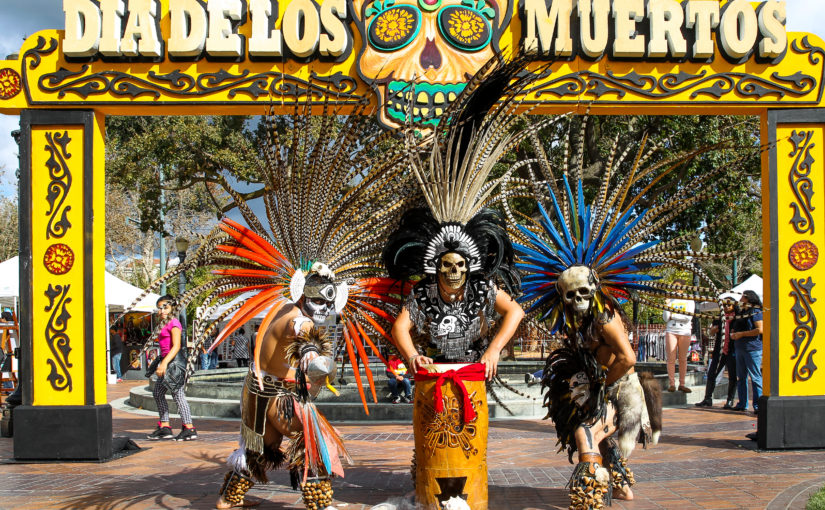 Celebrate the Day of the Dead in San Jose, go on a beer crawl with zombies in Martinez, watch muralists paint in Berkeley, or taste the best clam chowder at the Wharf Fest in San Francisco! Get ready for a fun weekend along the Capitol Corridor!

Celebrate the Day of the Dead in San Jose and come see an amazing display of Mexican history at the 7th Annual Dia De Los Muertos Festival this Saturday, October 22 from 11am to 6 pm. Experience a full day of live music, food, local artists, altars, and craft vendors. You’ll even witness Lucha Libre wrestling between Mexican free-style wrestlers wearing colorful costumes and masks. Bring the whole family and come early to this free event. Attendance has reached over 4,000 in previous years, and this year, the first 100 kids will receive a free skull shirt to color and keep. The festival is located at St. James Park in San Jose, which is about a mile from the Capitol Corridor’s San Jose/Diridon Station. From there you can walk or take a short light rail ride on the VTA Mountain View line with a free transit transfer from the Capitol Corridor.

Spend the day with the undead and head over to Downtown Martinez on Saturday, October 22 for the 4th annual Zombie Brew Crawl. From 2:30pm to 5:30pm, zombie-costumed revelers will be walking around the downtown corridor of Martinez, sampling craft beers from various small businesses along Main St. Zombie costumes are optional, but those who are daring enough to wear the ghoulish garb can enter to win prizes for best individual costume as well as best group costumes. Tickets can be purchased online in advance for $30, or $35 at the event. To get there, take the Capitol Corridor to the Martinez Station, which is just a short stroll from downtown.

Come watch master muralists paint the walls across the Berkeley/Oakland border at Bay Area Mural Festival — BAMFest 2016. The festival, which began on Monday, October 17 and runs through Sunday, October 23, will bring together 13 master muralists, mural groups, and 20 at-risk youth through a series of artist residencies and workshops. There will be live music, dancing, community painting, and a mural bike tour that will depart from the celebration and tour all the newly completed murals. Artists will give lectures and workshops throughout the week at La Peña Cultural Center, with the theme focusing on migration and displacement in the community.  Check online for details of mural locations. To get there, take the train to the Berkeley Station, and connect to downtown Berkeley on AC Transit with a free transit transfer from the Capitol Corridor. Or, take the train to the Richmond Station or Oakland Coliseum Station, connect to BART, and get off at the Ashby stop, which is just a few minutes from the cultural center.

Make your way over to San Francisco’s historic waterfront on Saturday, October 22, to celebrate the 4th annual Wharf Fest. From 11am to 5pm, there will be more than 50 vendors, as well as a variety of free activities, including a Segway obstacle course and rock climbing walls. Ten different Fisherman’s Wharf restaurants will battle it out for the title of the Best Chowder at the chowder competition. The event is free but the chowder competition tasting is $15 online or $20 at the event. Festivities will take place at the intersection of Jefferson and Taylor streets, at the famous Fisherman’s Wharf crab wheel sign, and on two blocks of Little Embarcadero St., between Taylor St. and Powell St. To get there, take the Capitol Corridor to the Richmond Station or Oakland Coliseum Station, connect to BART to downtown San Francisco. From downtown San Francisco, you can take public transit using Google Maps, catch a cab, or take Lyft or Uber.