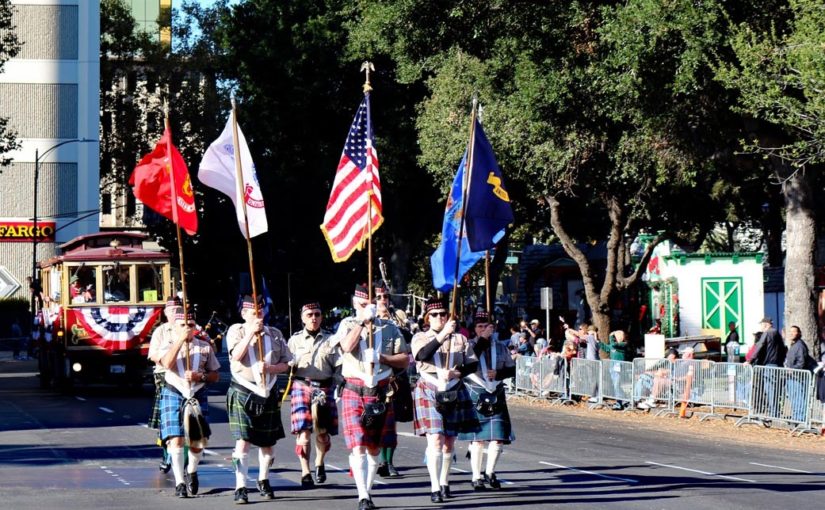 Show your appreciation for our military and attend the biggest Veterans Day Parade in San Jose, stroll around Jack London Square and check out collectibles and antiques, enjoy an active Sunday at the largest block party in San Francisco and check out the grand opening of Manetti Shrem Museum in Davis. The Capitol Corridor is your connection to a weekend full of events!

Show your patriotism and honor the men and women who served our country by coming to the largest Veterans Day Parade in Northern California on Friday, November 11, in downtown San Jose. The event will begin with an opening ceremony to celebrate the 98th anniversary of Armistice Day at 10:30am. At noon, the parade will begin at Plaza de Cesar Chavez at Delmas and Santa Clara Streets near the HP Pavilion, and travel east to Market Street, ending at San Carlos Street with Brigadier General Laura Yeager serving as the grand marshal. Take photos with historic and military vehicles on display or visit veteran organization booths. Plaza de Cesar Chavez Park is in downtown San Jose, about a mile from the Capitol Corridor’s San Jose/Diridon Station. From there, you can walk or take a short light rail ride on the VTA’s Mountain View line with a free Transit Transfer from the Capitol Corridor or ride VTA’s free Downtown Area Shuttle (DASH).

Bringing a curated mix of local makers with an indie flair, the Jack of All Trades Market will be open all day Saturday, November 12, at Jack London Square. From 11am to 5pm, the flea market style event will have over 100 local vendors, antique enthusiasts, collectors, artists and indie designers selling eclectic, one-of-a-kind items. There will also be over a half dozen DIY Workshops including — “make your own terrarium” and “make your own leather belts.” For hungry patrons, there will be an array of waterfront restaurants to choose from or options to taste the latest culinary trend from local food startup booths or food trucks. Entertainment will be provided by local bands, magicians and street dancers. RSVP on their Facebook event to enter to win a $100 shopping spree. To get there, take the Capitol Corridor to the Oakland Jack London Square Station, which is steps from the event.

Head over to Embarcadero on Sunday for San Francisco’s biggest block party, Sunday Streets SF. Spread over two miles along the waterfront, the streets will be closed from 11am to 4pm to vehicles, but open to pedestrians, roller skaters, bicyclists, and anyone else who want to roam freely without worrying about vehicles. Considered to be one of the longer Sunday Street routes, the car-free streets will be transformed into parks with an opening procession led by neighborhood community groups to encourage recreation, community activities and fun. There will be plenty of activities for the whole family, such as workshops that teach young cyclists to pedal without training wheels or how to safely share the road with oversize vehicles when cycling. To get there, take Capitol to the Richmond Station or Oakland Coliseum Station , connect to BART, and get off at Embarcadero Station, which is just a few short blocks from the center of the Sunday Streets route at Harry Bridges Plaza and the Ferry Building. Discount BART tickets are available for purchase in the Café Car on the Capitol Corridor.

Bring the whole family and check out the latest museum to open along the Capitol Corridor route this weekend for the grand opening of Manetti Shrem Museum at UC Davis. Starting at 10am on Sunday, November 13, festivities will start with a community street fair, a ribbon-cutting ceremony and an official public opening at noon. There will be live music, food trucks, and entertainment. The museum features a collection of over 6,000 works of art on display, and on the exterior of the museum, there is a three-dimensional 1,500-foot-long colorful chain fabric sculpture comprised of 400 interconnected soft-foam, chain links hand-painted by community volunteers “linking” the museum with the community. The primary goal of the museum is to bring the innovation and creativity of UC Davis to light. To get there, take the train to the Davis Station, which is under a mile from the museum. Connect to Unitrans (with a free Transit Transfer), which has three lines that will take you within a five-minute walk of the museum.