If your answer to the question above was “a bicycle”, we hope it was in part because CCJPA helped introduce you to folding bicycles at an event held November 28th, 2013 at Oakland’s Jack London Square station.  Capitol Corridor teamed up with Bay Area Bikes, who brought in representatives from Tern and Brompton  to showcase two excellent brands of folding bicycles,  let passengers and the community  test ride the bikes and get their folding bike questions answered by knowledgeable representatives. 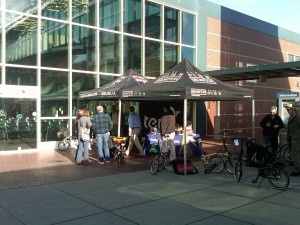 In the New Year, perhaps you or someone you know might be interested in ‘adopting a folder’ and using it for your first or last mile associated with Capitol Corridor train travel. CCJPA and Caltrans are in the process of creating more on-train room for bicycles, but with the growing popularity of bicycles and train travel, we know it will be a challenge to keep pace with full-sized bicycle storage demand on the train. A folding bicycle is a great way to use the available luggage spaces (which are generally more open than the bicycle racks) and leave space available in the bicycle racks for full-sized bicycles. Of course folding bicycles also work great with bus and BART travel.
If you missed the November 28th event, the good news is that a similar event is planned for December 5th, 2012 in Sacramento. Rex Cycles  and Edible Pedal will be teaming up with CCJPA for an event at the Sacramento Valley station from 2-6 PM. Respectively, they will feature Brompton  and Bike Friday  folding bicycles at this event. Representatives from both manufacturers will be on hand to answer your questions and let you ride-test the various folding bicycles.

We hope to see many of you at the Sacramento event. It might be your first step in welcoming a folding bicycle into your lifestyle!