Over the past year, the Capitol Corridor Joint Powers Authority (CCJPA) has seen

strong and steady growth in ridership, as well as progress made on many important safety and improvement projects.

Unfortunately, this success has not always been matched by reliable service. The Capitol Corridor’s service in the past year, and particularly over the past six months, has not been up to the levels you are used to and have come to expect from us. I know this is frustrating for you. It is frustrating, and unacceptable, for us as well.

As passengers, you have experienced delays of considerable length – 30 or more minutes – and sometimes extending into hours. The resulting end-point On-Time Performance (OTP) has been hovering around 90%, and station OTP has dropped to levels between 80% and 90%. In past years, OTP has ranged between 92% and 95%, and our goal is to push it back up and keep it in that range.

What Is Causing These Train Delays?

The increase in train delays has not gone unnoticed by the CCJPA management team and Board of Directors. We have been poring over data to learn more about why delays are happening, so we can fix the problems within our control, better understand and reduce those issues that are out of our control, and ultimately get our service reliability back on track so you can count on us to get you where you need to go. Reviewing delays over the past year, we’ve identified an assortment of primary causes for late trains and outlined them below, along with strategies for resolution. 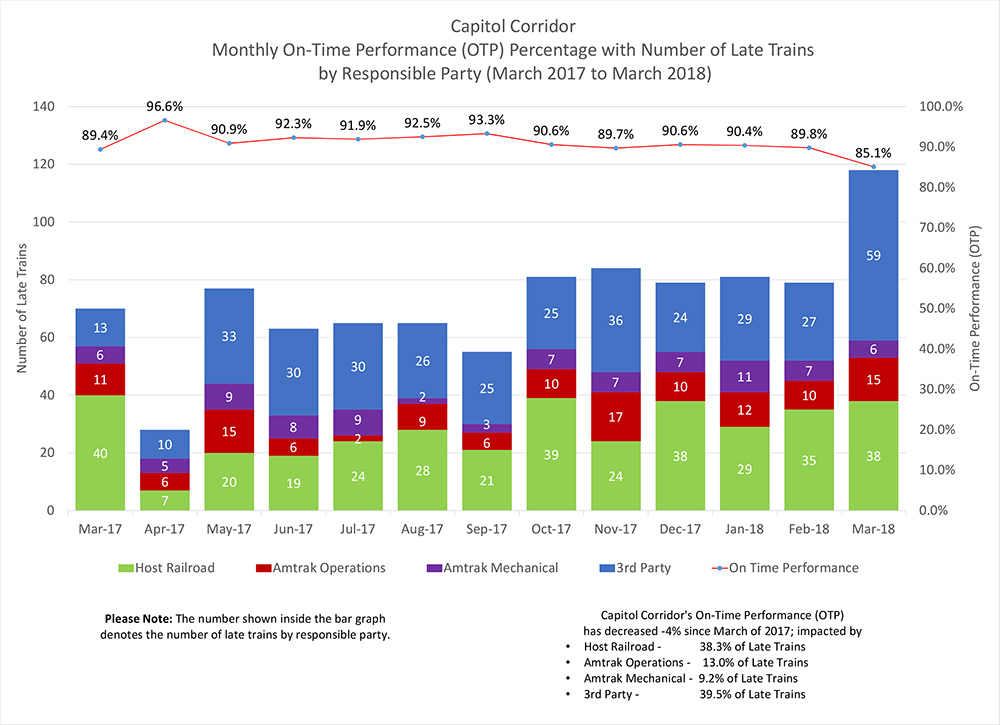 Mechanical delays are caused by non-safety related train problems. Some mechanical issues are a simple function of aging equipment, while others are related to maintenance. Also, while we are ecstatic about our sleek new Charger locomotives that reduce greenhouse gas emissions, the glitches that naturally go along with any new piece of equipment have taken longer to diagnose and resolve, contributing to delays. Now that the train engineers have more experience with the Chargers, we are seeing this segment of delays going down.What we’re doing: To reduce mechanical delays, we are continually working to finetune our maintenance procedures and training of staff. Caltrans, which owns most of our trains, is also looking to acquire more Charger locomotives, so we can ultimately replace all the older locomotives with modern, eco-friendly equipment.

Bridges
There are two bridges along the Capitol Corridor route – the I Street Bridge in Sacramento and the Carquinez Bridge between Martinez and Suisun. While our service rarely experiences delays at the I Street Bridge, the bridge in Suisun is one of the biggest sources of late trains. Because maritime vessels have the right of way, delays here are caused when the railroad bridge is lifted to allow ships through the Carquinez Strait as a train approaches.

What we’re doing: The Capitol Corridor and Amtrak are working with the Coast Guard to review all train delays caused by the bridge lift. This review will occur every 30 days to identify and reduce delays to Capitol Corridor trains. We have also provided the Bar Pilots Association, whose members are responsible for guiding vessels through the strait, with a schedule of all train meets at the bridge, so they can be aware of and avoid potential train delays as much as possible.

Signal Malfunctions
Signal lights, which are placed at set distances along the railroad tracks and are controlled by our operating partner and track owners, Union Pacific (UP), serve much the same purpose as traffic lights on roads – they allow trains to safely follow one another to help control the flow of traffic. If there is a problem detected along a segment of the tracks, a “red signal” will be activated as a default and stop all trains within that area. The system is designed to maximize caution and safety, and trains must be stopped and/or slowed down until UP fixes the problem and releases the trains.

What we’re doing: In partnership with UP, CCJPA is funding an upgrade of the track’s signal system, which will significantly improve reliability along the entire service area. The project is underway, and we expect it to be completed within three to six months.

Trespasser Incidents
Trespasser incidents occur when individuals unlawfully walk on or near railroad tracks and are hit by an oncoming train. These are not only the most disruptive incidents, causing delays of up to two to three hours due to the involvement of local authorities, but they are heartbreaking because human lives are usually lost. It bears repeating, being on or alongside railroad tracks is not only unwise, but it is also illegal because technically that area, also called the “right of way,” is owned by UP.

In less serious, yet similar circumstances, incidents along the railroad right-of-way (such as fires on adjacent properties or vehicles or debris on the tracks) may require law enforcement and railroad inspection activities that temporarily disrupt all trains in affected areas.

What we’re doing: In addition to our ongoing participation in education and outreach about safety around railroad tracks, the CCJPA has recently received funding to implement specific programs, in partnership with UP, to discourage trespassing, as well as encampments. This funding allows us to install protective fencing along particularly vulnerable areas of the route and to hire a crew, which is starting in April 2018, dedicated to regularly clearing vegetation and removing trash and other debris along the tracks.

See Something/Say Something
In addition, we’d like to ask for your help in reporting any encampments or large piles of trash you notice along the tracks. Please note the date, the train you are on, and approximate time and location and submit via the Capitol Corridor’s online feedback form. The CCJPA will work with UP to get clean-up crews to the reported site, and by doing so, will reduce the potential for delays. We appreciate your assistance in this effort.

10% Off in May . . .
In closing, please be assured that our top priority is, and will always be, to provide our riders with a safe and reliable journey within the Northern California megaregion. I understand that whether you’re traveling for work or pleasure, getting to your destination on time is of critical importance.

In hopes of compensating you for our recent delays, we will be providing you and fellow passengers with a 10% discount on Capitol Corridor tickets for the month of May (one-way, round-trip, Monthly or 10-ride ticket). More details will follow about the upcoming discount.

On behalf of the CCJPA team, please accept our apologies for the less-than-adequate service reliability you have been experiencing lately on the Capitol Corridor trains. Rest assured, we are taking the necessary steps to address the root causes of the current delays and implementing actions to limit and prevent their recurrence with the intent that you will continue to choose the Capitol Corridor for travel within Northern California.