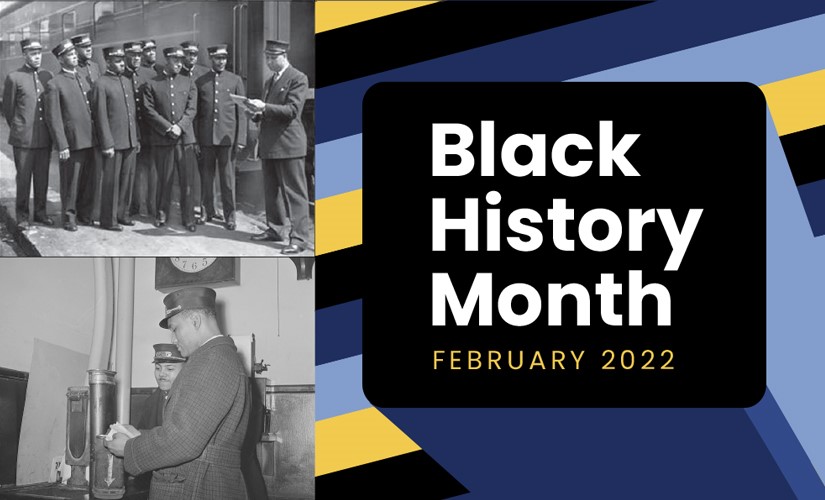 In an era when rail reigned transportation, the African-American porter workforce helped define luxury train travel. For almost a century, Pullman porters worked the sleeping and dining cars that gave white travelers an extravagant riding experience. Pullman porters, who were almost exclusively Black men, are also recognized for their role in developing the Black middle class and advancing civil rights.

Shortly after the Civil War, industrialist George Pullman began hiring dark-skinned Black men—many of whom were freed slaves—to attend to the needs of white passengers on his newly minted, opulent train cars.

Pullman’s first luxury car, “The President”, was touted as a “hotel on wheels”—a sleeper car with a full kitchen and dining car attached, and impeccable service provided by Black staff. White passengers, instead of calling the porters by name or by “sir”, addressed them as “boy” or “George”, continuing the racist practice of naming a slave after his master.

While porters were paid wages, they were among the worst-paid train employees, especially considering that the fees for sleeping car tickets were often double those of regular tickets. They had to supplement their pay with tips and often had to cover the costs of their own food and uniforms.

Porters also endured poor working conditions. The men slept in the “smoking car,” which doubled as the men’s toilet—their sleeping couch separated only by a curtain. A Pullman porter often worked 100 hours a week, sometimes on call for 24 hours straight and away from home for many days at a time.

Initially, the job of Pullman porter was considered desirable, even enviable, in the Black community. Wages were generally higher than other jobs and not as grueling as sharecropping, which was the other work typically offered to former slaves.

Being a porter also afforded African Americans the ability to travel the country during an era when travel for Blacks was restricted.

“America’s golden age of train travel often conjures up images of a glamorous, bygone era known for plush seats, gourmet dining cars, and spacious sleeping cabins—the epitome of which was the Pullman sleeper car. What might not come to mind is the skilled and industrious workforce behind that white-glove hospitality: the Pullman porters.

Their diligence, attention to detail, and impeccable service helped make the Pullman Palace Car Company the most desirable method of travel during the heyday of passenger rail travel. Founded shortly after the end of the American Civil War in 1867 by George Pullman, the Pullman Company popularized sleeping car train travel in America—for the white middle and upper class—by offering luxury sleeper cars and high-end service from Pullman porters.”

Because of their mobility and expertise, Pullman porters were ‘inspirational conductors of an overground railroad,’ says William Pretzer, Senior Curator of History at the National Museum of African American History & Culture. In an era before interstate highways and commercial flights, rail travel took millions of African Americans from the South, where Jim Crow laws made life especially unbearable, to northern cities like Chicago during the Great Migration from 1910 to 1970. ‘Porters offered sage advice about traveling via the train—the essential transportation system for African Americans to flee the South,’ Pretzer said.”

Porters also helped to disseminate job opportunities among southern workers. They spoke of the better quality of life and working conditions away from the south, which helped lure African Americans to communities up north.

While working the luxury cars and chatting with passengers, porters also learned about  investing, the importance of higher education, and other financial matters. This information gave them knowledge that encouraged them to save and send their children or grandchildren to college.

One Porter Pullman, A. Philip Randolph, started a movement to improve working conditions by leading his fellow porters to organize. The first all-Black union, the Brotherhood of Sleeping Car Porters was formed in 1925, but an agreement with the Pullman Company wasn’t signed until 1937. Decades later this union played a pivotal role in the advancement of the Civil Rights Movement.

After Rosa Parks was arrested for sitting on a Montgomery bus seat designated “Whites Only”, Mrs. Parks called the Brotherhood of Sleeping Car Porter union leader and NAACP activist Edgar D. Nixon. He, in turn, created a list of ministers he called to lead the Montgomery bus boycott. High on that list was a young minister, Martin Luther King, Jr.

The rest is history. American history.

Rail travel carried 98 percent of all intercity passenger service in the U.S. in the early 1900s. Airplane and auto travel knocked trains off of its throne by the 1950s; thus, the Pullman Company folded in 1968 along with its porter workforce.

In 1995, A. Philip Randolph Pullman Porter Museum opened its doors in the South Side of Chicago to celebrate both the life of  A. Philip Randolph and the role of the Brotherhood of Sleeping Car Porters and other African-Americans in the U.S. labor movement.

The A. Philip Randolph Pullman Porter Museum is housed in one of the original rowhouses built by George Pullman to house workers and is part of the U.S. Department of the Interior‘s Pullman National Historic Landmark District. The museum houses a collection of artifacts and documents related to the Brotherhood of Sleeping Car Porters.

For More Information about Pullman Porters

If you prefer podcasts over articles, NPR’s podcast Rising from the Rails, features enlightening interviews with journalist Larry Tye about the Pullman Porters’ influence in creating the Black Middle Class in the United States and their role in advancing our Civil Rights movement.

You can access the NPR interviews by using these links:

For a more local connection, check out authors Thomas and Wilma Tramble’s book:  The Pullman Porters and West Oakland (CA) (Images of America),  which can be found on Amazon.com.