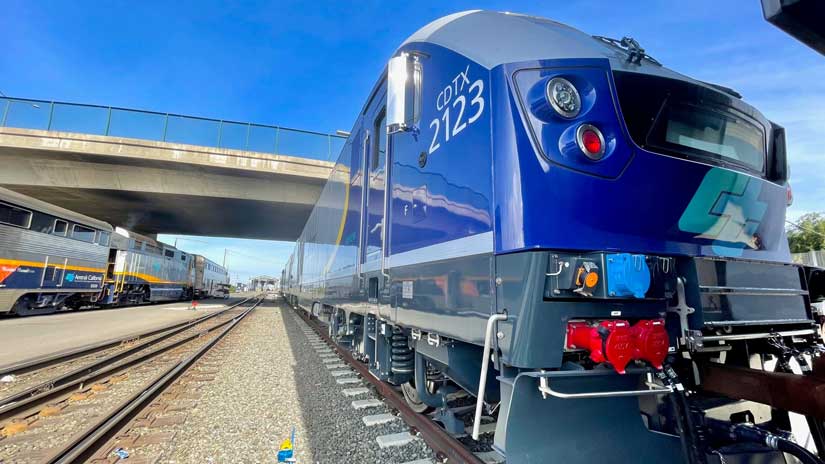 Caltrans Division of Rail and Mass Transit purchased the new locomotives to be used specifically for the Capitol Corridor, and the project was funded by the Bay Area Air Quality Management District  and co-funded by Sacramento Metropolitan Air Quality Management District and Placer County Air Pollution Control District through the Carl Moyer Grant Program. The new locomotives will go into service along the 170-mile route as early as the end of April and no later than June 1, which is when the two F-59s are required to stop operating.

“Thanks to this partnership between CCJPA, Caltrans, California Air Resources Board, and regional Air Districts, we have increased the number of EPA-certified Tier 4 locomotives in our fleet from eight to 10,” CCJPA Board Chair Don Saylor said. “By putting more locomotives into service that emit fewer harmful air pollutants, we are better equipped to minimize our environmental footprint and help meet State and Federal air quality standards.”

“Transportation is the largest source of planet-warming greenhouse gases in the United States today, and the bulk of those emissions come from driving vehicles on our streets and highways,” CCJPA Managing Director Rob Padgette added. “Encouraging travelers to choose trains and other forms of public transportation is a big factor in the clean air equation but operating cutting-edge technology—like locomotives that reduce harmful emissions—is a necessary part of the solution as well. When you ride a Capitol Corridor train, your trip produces one third the pollutants that are produced by driving your car, and our expanded fleet of Tier 4 locomotives will make your trip even cleaner.”

Capitol Corridor is on a path to convert all its remaining F-59s in the coming decade to Tier 4 in alignment with a State mandate that calls for 100 percent of off-road vehicles and equipment operations to be zero-emissions by 2035. The mandate includes a ban of any freight or passenger locomotives older than 23 years from operating in California beginning in 2030. In addition, the Capitol Corridor’s future green initiative is to run its trains on Renewable Diesel, which staff is currently testing and hopes to be using on all its trains by 2022.

About the Capitol Corridor:
Managed by the Capitol Corridor Joint Powers Authority (CCJPA), the Capitol Corridor is an intercity rail service connecting the most economically vibrant urban centers in Northern California – from Auburn/Sacramento to Silicon Valley, and including San Francisco, Oakland, and Berkeley. With free Wi-Fi on board, Capitol Corridor trains provide a convenient, reliable, and comfortable alternative to the congested I-80, I-680, and I-880 freeways for over 1.8 million work and leisure travelers every year (prior to the COVID-19 pandemic).