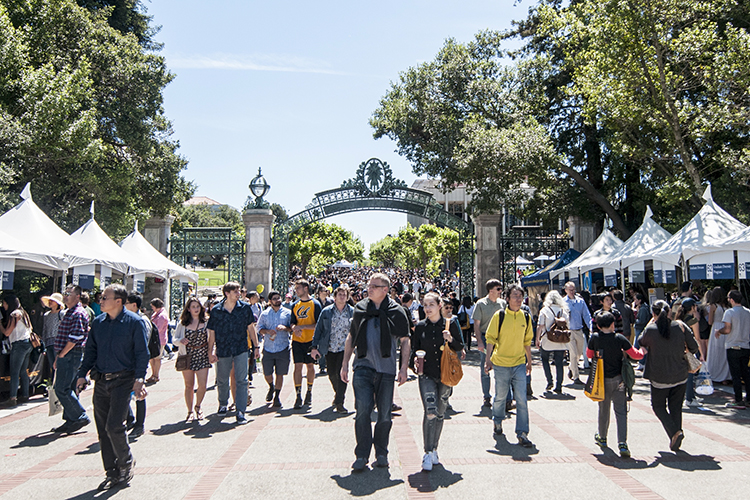 Whether you opt to celebrate Earth Day in San Francisco, enjoy a day of activities on the UC Berkeley campus, sample craft beer in Martinez, or watch some of the best turf dancers compete in Oakland, there are plenty of weekend activities along the Capitol Corridor!

Make your way to Civic Center on Saturday, April 22, and join thousands of Bay Area residents to celebrate Earth Day San Francisco. From 10am to 6pm, the free festival will feature dynamic panel discussions, speakers, and activists at the ‘Eco Teach In’ rally. There will be live music, an organic celebrity chef showcase, organic and vegan food courts, wine and beer gardens, a clean energy zone, cutting edge eco-friendly products, an electric vehicle showcase, a kids zone, and a 50th Anniversary of the Summer of Love Tribute Stage. This year, the March for Science and Science Fair will partner with Earth Day SF for a celebration at Civic Center Plaza. The monumental partnership will bring together a forum of expert scientists taking on a range of subjects from Global Warming to Sustainability. To get there, take the Capitol Corridor’s dedicated connecting bus from Emeryville Station to the Transbay Temporary Terminal. You can also take the Capitol Corridor to the Richmond Station or Oakland Coliseum Station, connect to BART, and ride to downtown San Francisco’s Civic Center station, which is just a short walk to Civic Center Plaza.

Enjoy over 400 activities at the annual eight-hour open house Cal Day at the University of California, Berkeley campus on Saturday, April 22. You’ll be able to explore the campus grounds with a hop-on-off cable car tour, a gallery walk of the Hearst Museum of Anthropology, listen to lectures by professors and leading researchers, and learn what life is like for a student-athlete at Cal Berkeley. Cal fans will have an opportunity to watch football practice, get a first look at the 2017 Cal football program, check out Memorial Stadium, and pick up a commemorative poster (first 2,000 entrants). There will also be a free concert by Los Angeles-based indie rock band Allah-Las closing out Cal Day. To get there, take the train to the Richmond Station or Oakland Coliseum Station, connect to BART, and get off at the Downtown Berkeley stop, which is about half a mile from the campus.

Calling all beer lovers! Head to historic downtown Martinez for the Bay Area Craft Beer Festival this Saturday, April 22. From 12pm to 4pm, the festival will highlight 50+ microbreweries, attracting more than 3,500 people to sample the artistry of more than 100 different craft beers. This year, there will be the first ever cornhole event for two-person teams with a point system that will determine the best eight teams competing for the championship title. There will also be live music and food from local restaurants available for purchase. The event will take place rain or shine, and general tickets for unlimited beer tastings is $35 in advance online, and $45 at the door. $10 from every ticket will be donated to Main Street Martinez, Inc. a not-for-profit organization. The event is for adults 21 years and older only — no kids or pets will be allowed. To get there, take the Capitol Corridor to the Martinez Station, which is just a short stroll to Waterfront Park.

Come watch some of the world’s best turf-dancers compete at Jack London Square for Turfin vs. the World Dance Battle. From 12pm to 6pm, on Saturday, April 22, the best turfin — the dance style originated in the streets of Oakland — dancers go head-to-head on the dance floor in a series of exhibition battles that showcase pantomime, footwork, storytelling and a separate series of dance battles open to the public to participate. At 12pm, there will be a turfin and krumpin 101 dance workshop for $15. There will also be 20+ diverse vendor booths, food trucks, and beers for the 21+ and over crowd. To get there, take the Capitol Corridor to the Oakland Jack London Square Station, which is just steps from the waterfront.