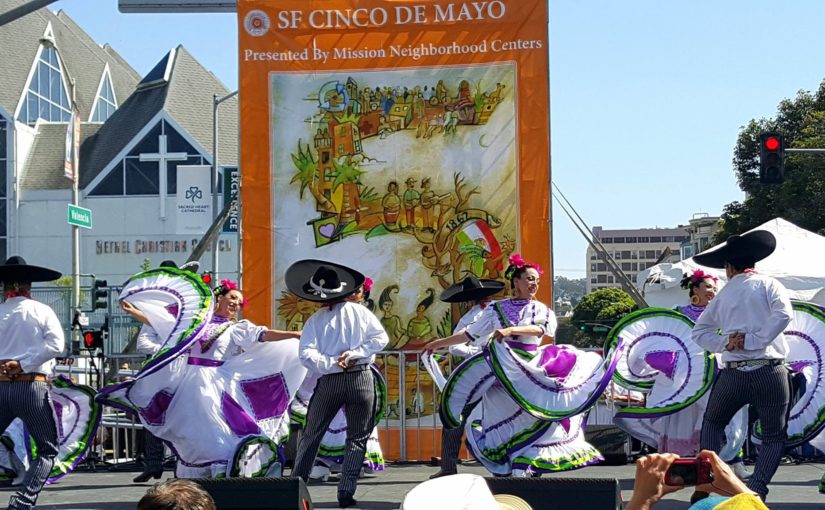 From San Francisco to Sacramento, celebrate an assortment of Cinco de Mayo fiestas this weekend! There are plenty of events marking the 155th anniversary of the Mexican Army’s victory over French forces at the Battle of Puebla. Or, enjoy a day of hip hop culture and music in Berkeley. There’s always something to get excited about along the Capitol Corridor!

Happening: 10am – 6pm
Get ready to get your party on in San Francisco’s Mission District at the 14th annual Cinco de Mayo Festival. The celebration will showcase the very best of Mexican and Latin American cultures with a diverse array of foods, music, dance, and artistry for the entire family to enjoy. This year, the free all-day family-friendly block party will have a Kids’ Zone with activities for children including games, jumpers, gymnastics/motion activities, art, and special guests for entertainment. More than 60 vendors are expected to participate providing diverse foods, as well as arts and crafts. Enjoy Mariachi, Salsa, Latin Rock, and the melodic voices of Coro Solera perform throughout the day on two stages located on the corner of Valencia and 21st Street. More than 8,000 attendees are expected to attend, so get there early!

Getting there: Depending on your station of origin, take the Capitol Corridor’s dedicated connecting bus from Emeryville to one of our San Francisco stops, or connect to BART and ride to the 24th Street station, which is a short stroll from the festival.

Getting there: Take the train to the Oakland Jack London Square Station, which is just steps from the waterfront.

Happening: 11am – 6pm
Bring a lawn chair or blanket and head over to the largest Cinco de Mayo celebration in the Sacramento area at Fiesta en La Calle Cinco de Mayo Festival this Sunday. Held at Southside Park, the event will be an exuberant celebration of Latino culture, food, and music, aimed at bringing together the community. There will be Latin entertainment – Samba, Aztec, and Salsa dancers, Ballet Folklorico, and DJ Omar. Other performers will include Funky Latin Orchestra, Latin/urban performers Rey y Kaye, the War/Lowrider tribute band, Cisco Kid, the Cuban Son, and the Don Gato Latin Band playing Salsa and Cha Cha. Not into music and dance? You can check out the car and bike show while indulging in delicious food and drinks.

Getting there: Take the Capitol Corridor train to the Sacramento Station, which is a little over a mile to Southside Park. From there, you can walk, take a cab, Uber or Lyft, or hop on the SacRT Gold Line with a free Transit Transfer to Southside Park.

Getting there: Take the train to the Richmond Station or Oakland Coliseum Station, connect to BART, and get off at the Downtown Berkeley stop, which is less than a mile to the festival.