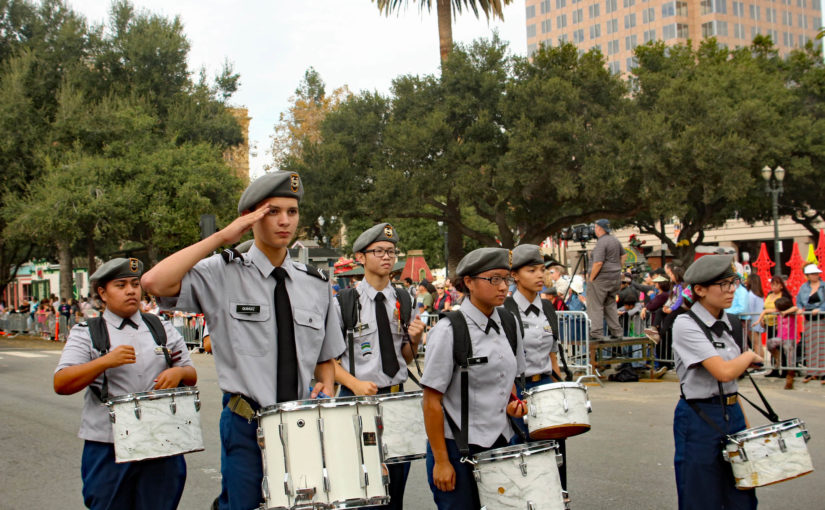 Show your patriotism this Veterans Day weekend by honoring vets and military personnel at a parade in San Jose or a steam train ride in Sacramento. Other activities along the Capitol Corridor include Oakland’s Jack of All Trades Market and a Discovery Day Science Festival at AT&T Park in San Francisco. Remember everyday veterans save 15% and active-duty personnel save 10% on their travel along the Capitol Corridor!

Join the men and women who served our country by coming to the largest military parade in Northern California in honor of vets and military personnel, the San Jose’s Veterans Day Parade. Celebrating the 99th anniversary of Armistice Day, the event will begin at 10am in downtown San Jose. Take photos with historic military vehicles on display and visit veteran organization booths. The parade will start at 11am on Market Street at Plaza de Cesar Chavez.

Getting there:Plaza de Cesar Chavez Park is in downtown San Jose, about a mile from the Capitol Corridor’s San Jose/Diridon Station. From the station, you can walk or take a short light rail ride on the VTA’s Mountain View line with a free Transit Transfer or ride VTA’s free Downtown Area Shuttle (DASH).

Head over to Sacramento this Veterans’ Day to honor their service and celebrate on a Veterans Steam Train Ride  at the California State Railroad Museum. On Saturday from 10am to 5pm, veterans and active military personnel will be offered complimentary steam train excursion rides and museum admission. Veterans and active military personnel are encouraged to wear their uniforms with pride while enjoying a music-filled train ride along the levees of the Sacramento River for a six-mile, 45-minute round-trip excursion. The train will feature a combination of vintage closed cars and open air gondolas. Train tickets cost $12 for adults and $6 for youths (ages 6-17), while children five and under ride free.

Getting there: Take the train to the Sacramento Station, which is a five-minute walk to the museum.

Calling all amateur scientists to San Francisco for the 7th Annual Discovery Day at AT&T Park. This Saturday from 10am to 4pm, engage with over 150 hands-on exhibitions from leading science and technology organizations in Northern California. Interactive activities will allow visitors an inside-look at the science of sports, learn about cutting edge biotech, and meet the scientists engineering the next cure. The ballpark will be overrun by robots of all shapes and sizes created by high school robotics teams, startup companies, and cutting edge research organizations. The event is free so get curious and explore on Discovery Day!

Getting there: Depending on your station of origin, take the train to the Richmond Station or Oakland Coliseum Station, connect to BART to downtown San Francisco. From any of these San Francisco bus or BART stops, you can take public transit, catch a cab, or take Lyft or Uber.

Enjoy Oakland’s beautiful waterfront at Jack London Square while finding flea market treasures at Jack of All Trades Market. Brought to you by the same people who produce Treasure Island Flea, the Jack of All Trades Market features a curated mix of nearly 100 local vendors, indie designers, antiquers, and artists. Tap into your creative side with DIY workshops for constructing terrariums and making leather belts. You can also enjoy live entertainment by local bands, magicians, and street dancers. Part of the market will feature local food startups and food trucks, while the tasty restaurants along the water will be open for hungry patrons. The market is held every 2nd Saturday from 11am to 5pm.

Getting there: Take the train to the Oakland Jack London Station, which is steps from the event.