Spotted 👀 — the Capitol Corridor cruising the

How are you celebrating Valentine’s Day? 💗

Heading into Valentine's Day this weekend, we want 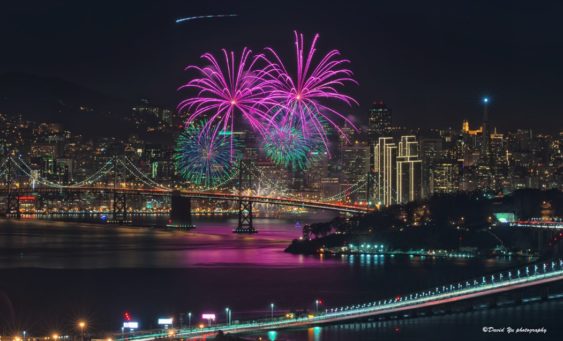 Bid farewell to 2017 and ring in the New Year with these great events along the Capitol Corridor route! Bring the kids and watch the Sky Spectacular in Sacramento, celebrate at the Balloon Drop & Family Celebration in Oakland, count down with the east coast in San Jose, or watch the San Francisco Bay light up with color.

Welcome in 2018 at the largest, free New Year’s Eve party as Sky Spectacular returns to Old Sacramento’s waterfront. The event will cater to residents of all ages, with live music from 6 to 10pm, food, drinks, games, a variety of street entertainment, and an awe-inspiring fireworks show. At 9pm, look to the sky as the fireworks show begins, the longest in the region!

Getting there: Take the train to the Sacramento Station, which is a five-minute walk from Old Sacramento. The last westbound train departs at 10:30pm.

New Year’s Eve is a family affair at the Chabot Space & Science Center’s New Year’s Eve Balloon Drop and Family Celebration. With three different countdowns, at 11am, 1pm, and 4pm, kids can ring in the New Year, without staying up past their bedtime. These balloon drops celebrate the stroke of midnight around the world, and activities with prizes will fill the time between celebrations! Participation in the New Year’s Eve celebration is $5 per child in addition to the Chabot Space & Science Center general admission.

Getting there: Take the Capitol Corridor to the Richmond Station or the Oakland Coliseum Station, connect to BART. Ride to the Fruitvale BART station, where you can you can take AC Transit with a free Transit Transfer, or catch a cab, Lyft or Uber. Buy discount BART tickets on board the train in the Café Car for added convenience.

New Year’s Eve at Christmas in the Park will host a special family oriented attraction from 7 to 9 pm before participating in an east coast New Year’s countdown! After the countdown, live music from local band SAGE will continue until the clock strikes midnight on our side of the country. Christmas in the Park is free to explore will stay open until just past midnight.

Getting there: Take the train to the San Jose-Diridon Station and use a free Ticket Transfer to ride VTA to Plaza De Cesar Chavez. You can also take a short cab, Lyft, or Uber ride to the event. The last eastbound train departs at 9:10pm.

Say goodbye 2017 and ring in 2018 with San Franciscans on the waterfront! Fireworks will kick off right at the stroke of midnight and will launch from barges located 1,000 feet out in the bay, just south of the Ferry Building near Pier 14. The best viewing spots will be along the Embarcadero between Mission and Folsom Street. The fireworks will be synced to music, which can be heard along the promenade from Pier 14 almost to the Bay Bridge.

Getting there: Depending on your station of origin, take the train to the Richmond Station or Oakland Coliseum Station , connect to BART and and head to the Embarcadero stop. From there you can walk, take public transit using transit using Google Maps, catch a cab, Lyft, or Uber. Capitol Corridor’s schedule will not get you back home after midnight, so this is a great option for those planning an overnight stay in San Francisco.