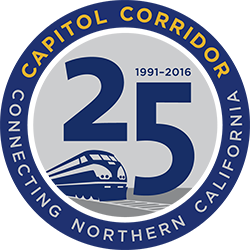 In 2016 Capitol Corridor celebrated its Silver Anniversary. For 25 years we have been connecting Northern California and providing reliable, safe, and convenient rail travel. Here are some milestones in the history of our service. Thank you to our riders and sponsors: