For “Rail Safety Month,” Capitol Corridor is releasing a new rail safety video that was produced in collaboration with the Oakland Athletics professional baseball team. The video features A’s popular mascot, Stomper, with voiceover by the A’s in-game host, Kara Tsuboi. The month of September was officially designated Rail Safety Month by the California Legislature in 2009.

“Like the rest of the country, Capitol Corridor has seen a rise in fatalities due to people trespassing on railroad tracks,” explained Gail Murray, board chair for the Capitol Corridor Joint Powers Authority, which manages the Capitol Corridor intercity rail service between Auburn and San Jose, California. “We’ve been a longtime partner of the Oakland A’s, and felt that Stomper and Kara would bring the right balance of serious and fun to this life-saving message. We’re happy the A’s agreed to assist and are thrilled with the result.”

According to Federal Railroad Administration statistics, California has one the nation’s highest trespasser fatality rates. Rail Safety Month was conceived as a means to reduce fatalities by increasing awareness about the risks associated with being near railroad tracks. With fatalities on the rise in recent years, Capitol Corridor hopes this video will prevent future incidents by educating people of all ages about the importance of rail safety.

Though the video has a serious message, it remains light-hearted and accessible for all audiences thanks to Stomper’s playful delivery of key rail safety tips. The video serves as a reminder to all that it is essential to be careful around train tracks, whether at a station, in a car approaching a rail crossing, or nearby open, unfenced tracks.

As Stomper demonstrates, we can all stay safe as long as we heed train signals and remain aware of the surroundings when in proximity to the tracks.

“The A’s remain committed to being a positive force in our community,” said Ken Pries, Oakland A’s Vice President, Broadcasting and Communications. “The Capitol Corridor is a vital part of our fans’ transportation network, and we hope this video helps deliver an important public safety message in a fun and engaging way.” 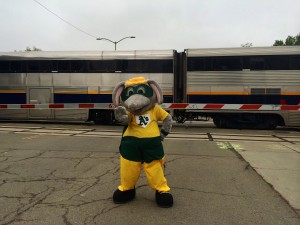 The video is available on Capitol Corridor’s YouTube Channel. If you would like to receive the video in a specific file format, please contact Karen Bakar at (510) 874-7494, [email protected]